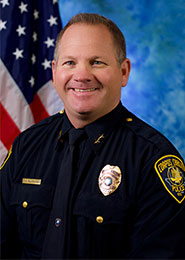 During his time on the department: 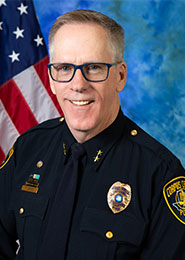 Assistant Chief Todd Green is a 34-year veteran of the Corpus Christi Police Department. He possesses a Bachelor of Science Degree in Criminal Justice and is a graduate of the Law Enforcement Management Institute of Texas (LEMIT), the FBI National Academy, and the Police Executive Research Forum (PERF) Senior Management Institute for Police (SMIP). He has served in the Operations Division as an Officer, Lieutenant, Captain, Executive Officer and Deputy Chief. Green served three years as a Narcotics Investigator prior to being selected as one of the original Gang Unit Officers when the unit was formed as "JET" in 1992 and was the first CCPD officer assigned to the FBI Safe Streets Task Force in 1996. Earning promotion to Lieutenant in 1997, then Captain in 2000, he has supervised the Gang Unit, the Organized Crime Unit, served as the Department’s Public Information Officer, and Executive Officer to the Chief of Police. As Deputy Chief, Green supervised the Administration Division, Operations Division, Crime Analysis Unit, Public Information Office, MetroCom, Central Records, Training, CALEA Accreditation, and Animal Care Services. In 2019, Green was promoted to Assistant Chief, where he led the Department’s Administration Bureau. In December 2020, Chief Green was transferred to the Investigations Bureau, where he is responsible for the Criminal Investigations Division, Narcotics & Vice Investigations Division, the Forensics Services Division, and the Criminal Intelligence/Organized Crime Unit. Green also proudly serves as the Assistant Chief over the Department’s Honor Guard. 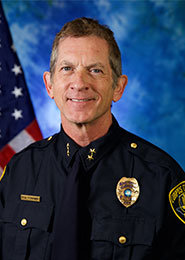 Assistant Chief Mark Schauer joined the Corpus Christi Police Department in 1982. During his time with the department, he has promoted through the ranks of Officer, Lieutenant, Captain, Commander, and in 2012 was promoted to his current rank of Assistant Chief.

Assistant Chief Schauer has supervised or managed every unit or division in the Police Department and was named “Peace Officer of the Year” for Texas by the Attorney General for a community policing initiative he spearheaded. He has a Master’s degree in Public Administration from Texas A&M/CC and graduated from the FBI National Academy (Quantico, Va., 202nd Session), the Senior Management Institute for Police (PERF/Boston), and the LEMIT police leadership program (Sam Houston State University). He serves on local boards to include Nueces County Mental Health and Intellectual Disabilities Metro Ministries, The Purple Door, and on CCISD’s School Health Advisory Committee and on their state mandated safety board. 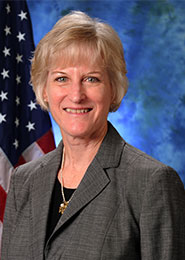 Pat Eldridge began her career with Corpus Christi Police Department in 1978. She holds a Bachelor’s Degree in Psychology and Economics from Mary Baldwin College and a Master’s Degree in Industrial Psychology from Middle Tennessee State University. She is a certified Law Enforcement planner and a member of the International Association of Law Enforcement Planners. She began her career with the department in Planning and Research conducting research for the department. She advanced to Police Administration Manager where she served as the management assistant to the Chief of Police, grant administrator, planning and research, and over saw payroll process, purchasing process, develop specifications for purchases of services/equipment, development of Requests for Proposals, evaluation of bids/proposals, and approve expenditures for a $55 million budget. 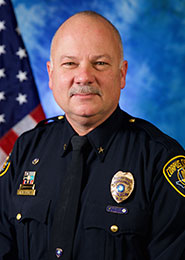 Deputy Chief Bowers holds a Bachelor of Science degree in Political Science from Howard Payne University. He is a graduate of the 253rd Session of the FBI National Academy, the 77th Session of the Law Enforcement Management Institute of Texas Leadership Command College, and the 80th Session of the Senior Management Institute for Police. He is a TCOLE Master Peace Officer and a certified TCOLE instructor. Deputy Chief Bowers is a veteran of the United States Army and earned his officer commission in October of 1991. 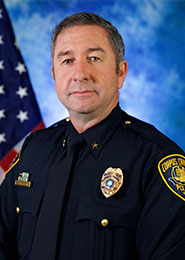 Deputy Chief Billy Breedlove is a 30-year veteran of the Corpus Christi Police Department. He earned a Bachelor of Science degree in Criminal Justice from Sam Houston State University and a Master of Science degree in Criminal Justice from Lamar University. He is a graduate of the Law Enforcement Management Institute of Texas (LEMIT), Senior Management Institute for Police (SMIP) and FBI National Academy. He is currently serving as Deputy Chief over the Administration Bureau. As an officer he served as a patrol officer, Field Training Officer, Peer Support Team and Gang Unit officer. Deputy Chief Breedlove was promoted to Lieutenant in 1998 and held supervisory positions in Uniform Patrol, SWAT, Gang Unit, Auto Theft Task Force and Criminal Investigations Division (CID) – Robbery/Homicide. In 2008 he was promoted to Captain and held supervisory positions as District Captain in Patrol, CID, Emergency Operations Center Liaison, Training, Traffic Safety, and Narcotics Vice Investigations Division. He served 16 years on the SWAT team as an officer, Team Leader, Executive Officer and Commander. He is a United States Marine Corps veteran. 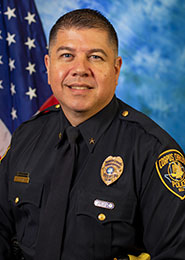 Deputy Chief James Lerma, a native of Corpus Christi, joined the Corpus Christi Police Department in January of 2000. In his career, he served in several capacities within the police department to include patrol officer and detective. In 2013 he was promoted to Lieutenant and supervised Field Operations and Criminal investigations. He was promotion to Captain in 2018 and served as Patrol District Captain and Training Division Captain. In 2020 he was promoted to Deputy Chief where he served in the Administration Bureau managing Training, Backgrounds and Recruiting, Fleet Services, Parking Control, and Animal Care Services. Deputy Chief Lerma currently oversees Criminal Investigation Division, where he manages five investigative units (Homicide, Family Violence, Property Crimes, Special Investigations, and Auto Theft). 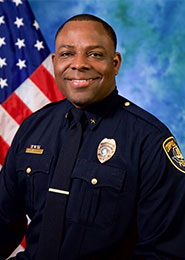 Deputy Chief Anthony Sanders is a 9-year U.S. Navy Veteran with over 20 years of police service. He holds a Bachelor's in Criminal Justice with Excelsior College, and is a F.B.I. National Academy Graduate, 264th Session. He holds a Master Peace Officer Certification. During his time with the department, he has worked as a recruiter and a Field Training Officer F.T.O. As a Lieutenant, he has supervised multiple patrol shifts, and helped to develop, implement, and supervise the departments current K9 Program. As a Captain, he supervised the Bravo District, which spanned from Staples to the island. He also supervised the departments Accreditation Unit which was responsible for inspections and the department's (CALEA) Accreditation; the department was reaccredited during that time. Crime Reduction Unit Supervisor Unit which consisted of Directed Patrol Officers, Bike Unit, and Utility Terrain Vehicles Unit. Primary mission of the CRU is to focus on street level crime and quality of life issues primarily within the downtown business district and the Leopard Street corridor. In 2019 he promoted to the rank of Deputy Chief, he has supervised MetroCom/Dispatch, Police Impound, Human Resources, Central Records, Radio Techs, and Building M&O. He currently supervises Narcotics/ Vice Investigations. 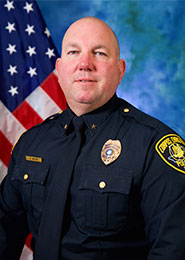 Deputy Chief Christopher White joined the Corpus Christi Police Department in 1999. He holds a Bachelor’s Degree in Criminal Justice from Midwestern State University and a graduate of the 2018 PERF’s Senior Management in Policing. He was a member of the 57th Corpus Christi Police Department Academy,holds a Master Peace Officer certificate, was a SWAT operator for 4 years and was “Supervisor of the Year” in 2014.

During his career, he served as a patrol officer for 9 years before promoting to Lieutenant in 2008. He was Lieutenant for 7 years, during which time he was a supervisor in Patrol and then CID, where he supervised Financial Crimes and then the Auto Theft Task Force. He promoted to the rank of Captain in 2015. As a Captain he has held the following positions: Program Manager Animal Care Services, District Captain, Gang Unit, CRU, DPO, Crime Prevention, Code Enforcement, and Administration. In 2019, he was promoted to his current rank of Deputy Chief where he has served as Deputy Chief of Operations Division, Narcotic/ Vice Division, and his current position in Administration Division. He is an Army combat veteran having served in Operation Desert Storm and is a recipient of the Bronze Star.